In his account of MHA’s first 40 years, Home for Good, Cyril Davey emphasises the forward-looking nature of what was being attempted during the organisation’s early years. MHA came into being prior to the Welfare State, in the face of wartime restrictions and at a time when the only option for many old people was to live out the end of their lives in the workhouse.

The prospect of Methodists establishing Homes for the Aged was an idea of considerable vision at a time when little about the future was certain. The founding committee had great ambitions, and they were an influential group with considerable drive. The Chairman of the group was businessman Sir George Martin.

The story of Berwick Grange begins with a game of bridge in Harrogate when Sir George Martin’s partner mentioned that he had had to give up his house as it was too big to keep up and there were not the staff available. Martin took the opportunity to go and have a look at the property and decided to buy it, offering the sum of £5,500. 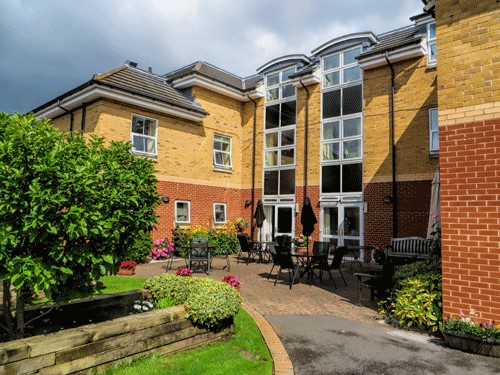 Berwick Grange was the second Methodist home to be opened, and the first in Sir George’s home territory of Yorkshire. The home existed on Harrogate’s Otley Road for 60 years before moving, in December 2006, to purpose-built accommodation on Wetherby Road. The new home’s three floors were originally designated as one for residential, one for nursing and one for dementia care. A few years later the registration altered again to provide two floors of nursing dementia care and one floor of residential dementia.

The new building cost 4.7 million pounds, a far cry from that first sum paid by Sir George Martin! The home offers accommodation for 52 older people who are looked after by a caring and devoted team of around 70 staff. It is now managed by Mr Krishnapillai Sivanandarajah who took over the reins from Mandy Scott.

Chief Cook Helen Eckert has been on the staff of Berwick Grange for over 30 years! She presides over an excellent and varied menu with choices of at least two items for lunch and tea time along with a choice of desserts. In addition, the catering team support the work of the volunteers, providing all manner of cakes, scones and biscuits for fund-raising events. Birthdays and anniversaries are celebrated in appropriate fashion.

There are numerous activities planned each week for the residents, with two full-time activities co-ordinators overseeing this work. Each Wednesday morning a church service is held with communion once a month and hymn singing takes place weekly, led by Chaplain Sue Langley. Regular outings are undertaken to Collingham and Boston Spa where teas are organised by Wetherby in Support of the Elderly.

Keep Fit Dave comes in weekly to lead armchair dancing and armchair keep fit. Music therapy is held every Thursday with a group session available to any resident who wishes to attend and individual sessions for five residents, who have been assessed as being the most likely to benefit. In addition, craft, singing, ball games, flower arranging, quizzes, baking, nailcare, parachute games, golf, book and newspaper reading are some of the many activities arranged. A weekly timetable is published and displayed in the entrance hall. With its strong spiritual ethos, MHA believes that everyone has spiritual needs, a need for meaning and purpose in life.

The home is supported by many volunteers who help with various aspects of work mentioned above, including driving the mini-bus, and assisting staff with the feeding of residents who are unable to do this for themselves. The volunteer group was established as a direct result of the efforts of (the late) Brenda Bamforth some 15 years ago as she wished to try to involve members from all the churches in the circuit. Her work continues as the committee plan regular fund-raising events to directly improve the lives of the residents.

We use cookies on our website to give you the most relevant experience by remembering your preferences and repeat visits. By clicking “Accept All”, you consent to the use of ALL the cookies. However, you may visit "Cookie Settings" to provide a controlled consent.
Cookie SettingsAccept All
Manage consent

This website uses cookies to improve your experience while you navigate through the website. Out of these, the cookies that are categorized as necessary are stored on your browser as they are essential for the working of basic functionalities of the website. We also use third-party cookies that help us analyze and understand how you use this website. These cookies will be stored in your browser only with your consent. You also have the option to opt-out of these cookies. But opting out of some of these cookies may affect your browsing experience.
Necessary Always Enabled
Necessary cookies are absolutely essential for the website to function properly. This category only includes cookies that ensures basic functionalities and security features of the website. These cookies do not store any personal information.
Non-necessary
Any cookies that may not be particularly necessary for the website to function and is used specifically to collect user personal data via analytics, ads, other embedded contents are termed as non-necessary cookies. It is mandatory to procure user consent prior to running these cookies on your website.
SAVE & ACCEPT